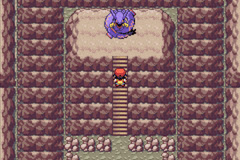 A challenging and revised Kanto, with an extended story, harder difficulty, all legendaries obtainable. 386 mons, every hero, gym leader, and popular character from the first three generations all making an appearance.